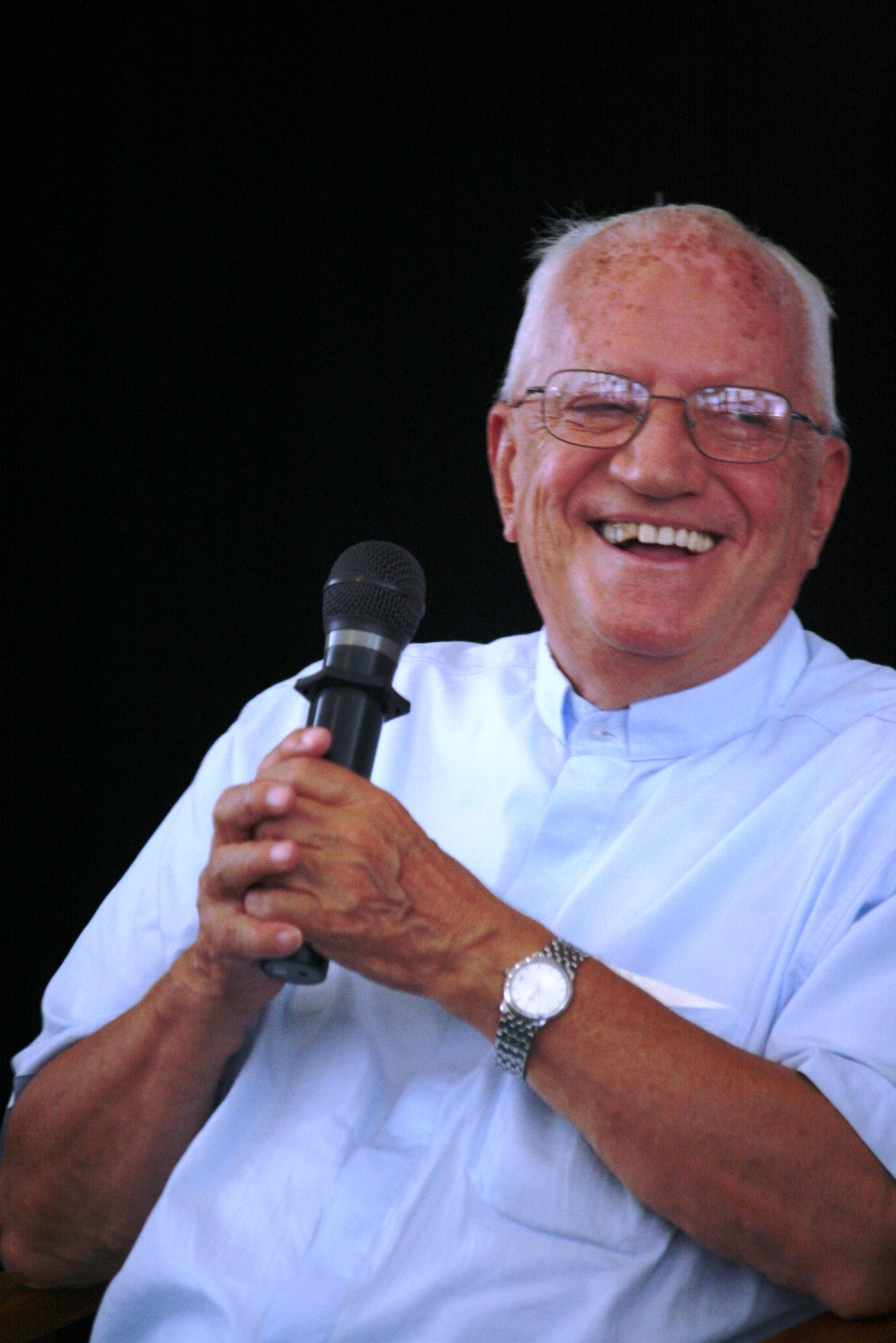 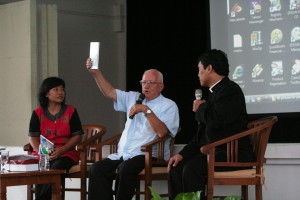 IT is his first visit to Indonesia. However, the very first day Father Giuseppe Buono PIME had the chance to address Jakarta Catholics coming from various parishes in the Archdiocese of Jakarta, this emeritus professor soon gets his credit as a truly hospitable and “holy” priest to whom most Indonesian Catholics have always devoted.

Speaking during a talk show in Saint Jacob Parish Church of Kelapa Gading in North Jakarta on Saturday (August 13) to address at least 300 Catholics, the priest soon becomes a center for public affection  strongly shown by Jakarta Catholics as dozens people approached  him asking his signature for his newly published book in Indonesian. His book in Indonesian translation is entitled Berziarah bersama Maria (Pilgrimage with Mary) and was translated by Mrs. Yohana Halimah, an official in the Commission for Mission in the Indonesian Bishops of Conference (KWI). 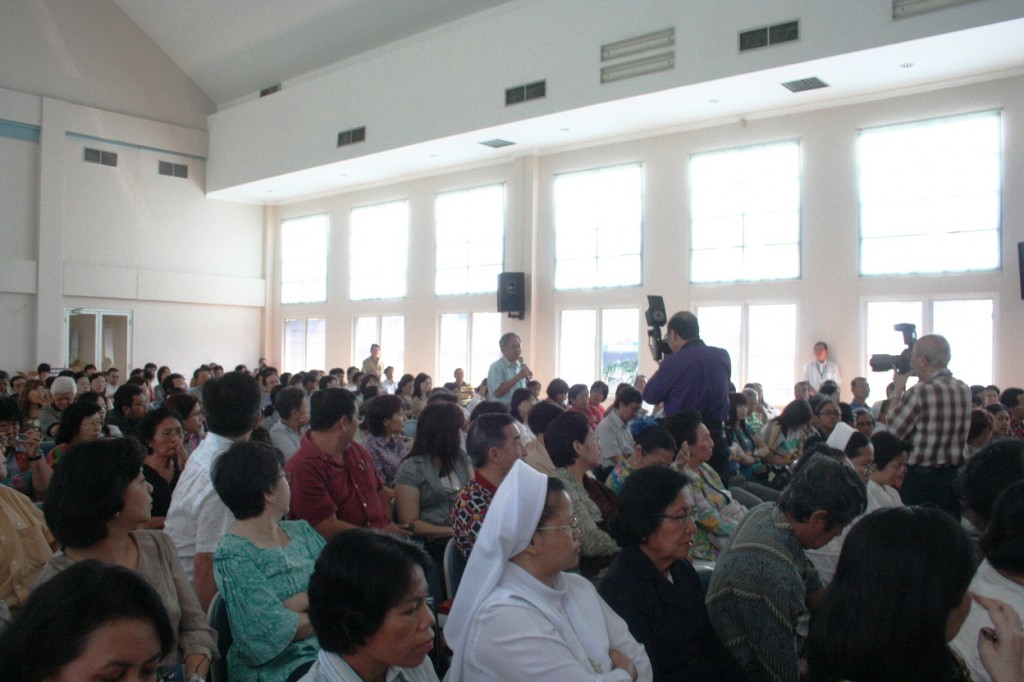 But most of all, because Father Buono is really a holy, hospitable person with a very charming personality and of course a good and passionate priest for the Eucharist.  “I really want to visit Indonesia because as I often hears, Indonesia is a very beautiful country with dozens of ethnics and multi-cultures. In short, Indonesia is as beautiful as my native town of Napoli,” he said to commence his speech on his personal impression on Beato Gianni Paolo II as written in his book entitled Con Maria Sulle Strade del Mondo.

Indeed, he spoke a lot of the late Pope John Paul II. But rather than entertained Indonesian Catholics in Jakarta Archdiocese with a scientific or academic presentation about Gianni Paolo II, Father Buono spoke of his personal impression on how he personally knew the pope from his frequent meetings and gathering with Gianni Paolo II within the Propaganda Fidei office.

That’s why, despite his Italian presentation be translated by Father Justinus Sulistiadi Pr –a diocesan priest from Jakarta Archdiocese–  which only some people may know, Father Buono’s presentation was warmly welcome by the audience. Rather than speaking about  Pope John Paul II on text, he told the untold stories about the late pope. And the story was very touching, as hundreds of Jakarta Catholics may have the same strong adoration toward this particular Pontiff.

Above all, this is all about Eucharist and Maria –these two significant “heritage” from Pope John Paul II on which both Padre Buono and all Indonesian Catholics have long shown their strong adoration. 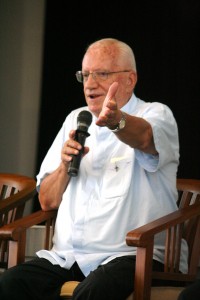 “Once I was personally invited by the Pontiff to enter his private chapel in the Vatican where he was used to say the mass. As he cited the words of the “Eucharist”, he suddenly stopped and within seconds he murmured as if something uncommon voices came from his mouth…The way Pope John Paul II has used to say mass was something very impressive,” said Father Buono as within seconds he could “hypnotize” the audience with this personal story about the pope.

He also added that anywhere he made a papal visit, he always asked local host about where is the chapel he could pray and say the mass. “The Pontiff had performed a strong adoration to the Eucharist and spiritual adoration to the Holy Communion,” said Padre Buono.

Speaking about Maria, this emeritus professor of missiology added that from his early childhood Pope John Paul II was brought up in a family of whose adoration and love for Maria was great. “He continued to perform his strong affection on Maria during his papal years as he also made his official seal with the logo “M” as the abbreviation of Maria,” told Padre Buono.

Strong adoration on the Eucharist and Maria, explained this Italian priest, were John Paul II’s significant heritage to the church.

“When he was elected as the new pontiff in 1978, unexpectedly shortly after making his first address in the Vatican’s balcony he asked all cardinals to go down to underground grotto to exercise his strong affection and adoration to the Black Madonna icon from Lithuania. This was something extraordinary as never practiced by his predecessors,” said Padre Buono.

To show his love for Maria, the Pontiff made dozens of pilgrimage to Mary’s sanctuaries across the world including Fatima, Lourdes. “He has a strong affection to Madonna de Fatima of Portugal,” he said.

Describing the strong affection of Madonna of the Fatima, Father Justinus Sulistiadi added that the Pontiff might have died during a fatal shoot by Mehmet Ali Agca if only something uncommon might “happened”. It was the help of Madonna who finally drove the bullet out of his vital organs.

Answering a question from  the audience about John Paul’s habit to kiss the soil as soon as he got down from the plane during his papal visit, Padre Buono explained that such gesture was intentionally performed by the pontiff with a cause.

“In my opinion,” said Padre Buono, “The Pontiff seemed to exercise what was good from Le curé d’Ars Saint Jean-Baptiste-Marie Vianney who had ardent adoration to Eucharist. The soil is material to be created by God. So by kissing the soil, the Pontiff would tell the congregation that every creatures should return to their Creator and hail their adoration to God,” said the priest.

Asked by AsiaNews after the talk show ends, Father Buono said that he was extremely happy to see Indonesian Catholics have something both in common as he personally also been practicing to this present time: an ardent affection and adoration to both Eucharist and Maria. “If you want to follow the good path of Beato John Paul II, there are no other way of exercising ardent adoration for the Eucharist and praying the rosary,” he said.

Yes, extremely indeed. After the talk show, dozens of Catholics approached Father Buono to “officiate” their new rosaries with his priestly blessing.

In Indonesia, majority catholics perform their ardent adoration to the Eucharist and Maria by praying the rosary within a praying group or gathering as well as in the mass. Pilgrim to Mary’s shrines to be found across the country are among the most favourite Indonesian catholics to perform their faith. 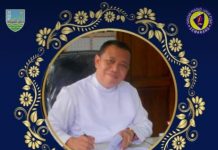 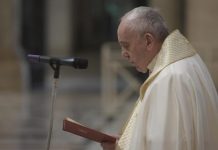 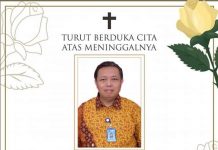